' There are three principal means of acquiring knowledge . . . observation of nature, reflection, and experimentation. Observation collects facts; reflection combines them; experimentation verifies the result of that combination.'

The following is a list of items needed to make the system work, or run better than it will with what we have now.

What we need is a comprehensive licence to cover all digital media. While is may be possible to get away with 'permission is granted to copy for personal use only' perhaps with an added 'You are prohibited from selling this artwork', a more comprehensive licence may be needed setting out the concept of the agreement.

Going by the mantra of 'using what is already on offer', the Creative Commons initiative seems to tick all the right boxes and is well supported.

The Creative Commons' licences do not cover the mutual exchange aspect of the the AU initiative. On the plus side; they have licences for many of the worlds jurisdictions tailored to match the laws of that country, are updated regularly and are well known.

This Creative Commons' UK page lists the all the licences applicable to the UK. The first two are very close to what is needed, especially the: 'Attribution Non-commercial No Derivatives'. The licence's legal text is pretty straight forward. It is this 'legal code' that would have to be included in the zip file, made clear on the artist's web site and included on any hard copy (even on a music CD).

These are similar in concept to the Open Source community's General Public Licence (GPL) by the GNU project (more on wikipedia). The current version of the licence is V3. It would be interesting to get a version for use with the AU initiative.

Notes: Make is simple to get across: ' you can use any Creative Commons licence with the added mutual exchange clause'.

This is not for the average fan's sake, I'm sure they would have no problem understanding the whole concept and following it in the spirit it was intended. No, this is to stop the predators in their tracks who use the law as a weapon to get what they want. There is no point handing out an artwork if big business then swoops down from on high, snaps up the artwork via crafty ploys to exploit the situation to their own ends. Or challenge the copyright of the artists, arguing it is in the public domain and using an unknown artist's track on adverts without paying a penny. I wouldn't put is past them to change the law, and an agreement is much harder to circumvent that a sentence of two. This 'agreement' would also be designed to protect an artist from governments changing the copyright law, as I sure big business would lean on them, and government never listens to is people if big business is at the door with a fistful of cash.

This licence should include the following concepts;

How do you pay for something without paying money?

You pay "in kind" with service. The hosting of an artist's compressed file for sharing via P2P could be considered as providing a service, and this service could be seen as "payment" as such, directly proportional to the extension of the home approval period. This is hosting a file on P2P in return for rights to use it. This gives a basis of "business" transaction or agreement. It is not free, the fan is "paying"!

Control of hard copy: The downloader (licensee) can make hard copies and hand them out, but these hard copies can not be duplicated by others (i.e. a CD hard copy given freely to another can not be ripped) as these hard copies would technically remain the property of the one giving them away (i.e. a loaner, in the same way a bank owns your credit card and can ask for it back at any time) and the copyrighted material on them can not be given away (the licensee does not have the right to do that).

(Disclaimer: This is not the actual contact, it is a list of points to be considered. It is written in plain english, and not legal mumbo jumbo.)

Notes: Two part licence? Perhaps your can share the files while using the artwork on approval, but only a full licensee can make a physical copy or hard copy CD, DVD or print. Hard drive and flash drive would be ok? Or perhaps the those on approval must have the zipped file in their P2P share folder - once they pay they can remove it if they so wish? Or is paying for the artwork granting a new licence, or activating clauses?

Any thoughts on this, and ideas of how to make a workable system are more welcome (after all that's what this sit is all about!). Other thoughts;

Any (free) help from honest Law folk would be most welcome. If you wish to chip in, or write up a draft contract please do so and post it to the usual address or in the forums [note to self: sort out a forum]. Drafts can be argued in public (yeah, I can see Lawyers jumping at the chance!). The only incentive is that you could change the world, that you can remain anonymous if you so wish (with only 'Artists Unchained' will know who you are).

If going with a 'like for like' licence agreement idea: VAT/ Sale tax. Looking at the EU directive for VAT in relation to internet delivered information; it doesn't seem to cover files downloaded from P2P, as there transmission/ download sites are static and one (registered) place.

So where's the point of sale for VAT?

I would assume it would be the 'donation button' is hosted, or relative to the person making the income?

If so, then Pay Pal (europe) is licensed as a Luxembourg credit institution, so european VAT, and claim the remainder as 'income' to the tax man.

Does this mean that any 'sale', i.e. each and every donation made through a web site via Pay Pal is subject to VAT and then the remainder income tax? (probably about 40% of the 'donation').

Hosting files for extension: No profit made. No tax due (correct?)

The mutual exchange of file hosting and advertising for extension of licence is a closed system and considered a non-profit endeavour (like for like, if assigned a monetary value, it would be a 1:1 ratio). Is this exempt from tax?

If it is, what about a donation button, or gift button on a web site. Seeing as the licence is already paid for via non-profit mutual exchange, then a 'gift' is not for the artwork (as the artwork is being paid for continually).

As this is a gift, does it come under inheritance tax, in the case of the donator dying.

Tax Free gift: Apparently in the UK first £3,000 worth of gifts is tax free, and then up to £250 to as many individuals as you like. The donor is responsible for paying the tax.

Ironic: A busker (not a beggar) could be tax as the donations are obviously for the music being played. Payment for the performance. However, if this scenario is true, then under this scheme the performance is not paid for with money and benefits the 'busker' in no material way. An analogy would be that a person says thank you and leaves no money, however when down the pub the grateful listener is happy to see the busker and buys them a pint.

Hmm, I wonder if an artist using this system can apply to become a 'charity' or non-profit :P

Government: The downloader who makes a hard copy will still have to buy the disk, printer, ink, paper which is all taxable. Even if they don;t make hard copies, using this system will most likely purchase a huge hard drive to house all those compressed files in addition to uncompressed media file, and purchase bigger broadband, which are both taxable.

Further: It will benefit society as a whole, as it will drive broadband and technology take up, bring down the cost of getting music and art to the point where even the poorest can afford it (or get a hard copy of a fiend without fear of punishment), contribute to cutting carbon dioxide emission due to less goods traveling by road (a cake of 100 CD is much more compact that 100 music CDs, and downloading has no mass) and people not using their car to go to the store to buy music, increasing freedom of speech, it gives art back to the people, art becomes representative of the society that makes it, all society's people are represented, all access becomes equal, and it all generally benefits society to a huge degree. A more efficient, artistic and happy community, fulfilling is obligations to the environment and getting technology to all.

It moves artistic endeavour out of the business world and back to social and sharing (the AUL licence it to stop business taking advantage of social interactions).

On the negative side big media will have your balls, and you will be out by the next election ;)

(Thinking of java would it be possible to run that as a java application within a browser? Browsers with java plug in are pretty common. I wonder if Google would host it and a Beta Lab project?)

P2P and compression combined: A P2P application that can only share special 'AUL' compressed files. These files are by default stored in the share folder and automatically uncompressed when moved to the licensee's media folder. The AUL compressed files can be deleted as normal. Only the P2P/ compression software can uncompress the files - must be open source software, and must allow more than one manufacture of software. 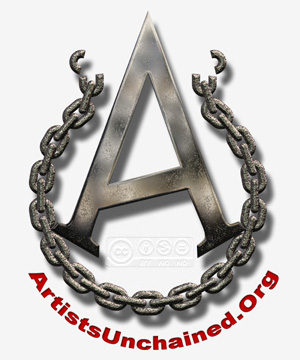